Environment and Climate Change Canada is the federal government department that is responsible for the conservation and management of migratory birds in Canada. However, the status of most songbirds breeding in northern boreal regions is poorly known given limited geographic coverage of current monitoring programs.

The objective of the project is to explore the potential of automatic recording units in order to increase geographic coverage of monitoring programs by deploying units along winter roads. Winter roads are temporary roads over snow and ice that do not otherwise exist in other seasons. "By deploying automated recording units along the winter road, we can monitor songbird populations in remote areas without the high costs of helicopter-based programs," says Samuel Hache from the Canadian Wildlife Service, Environment and Climate Change Canada team. The data will provide important information on the status of migratory songbirds breeding in pristine ecosystems, on species abundance and distribution, and climate change effects. 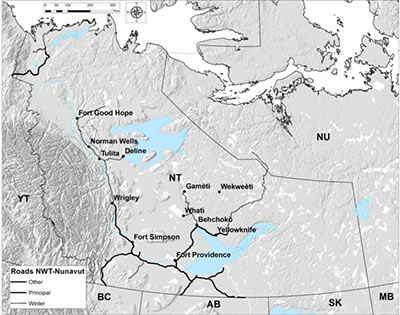 There are three major winter roads in the Northwest Territories (NWT) being used to access diamond mines and isolated communities. The first phase of the project was conducted along the Tibbitt to Contwoyto Winter Road, which starts 70 km east of the city of Yellowknife. The road winds 400km northeast to diamond mines near the Nunavut boarder. The main stakeholders are the Tibbitt to Contwoyto Winter Road Joint Venture, the Government of the Northwest Territories, and local communities. Stakeholders approved for the monitoring program and the Joint Venture provided in-kind support.

The Role of the Song Meter Recorder

Deploying automated recording units along these roads is an efficient way to increase geographic coverage and monitor songbird communities in northern boreal regions where traditional human-based point count surveys would have to be conducted during the breeding season. Environment and Climate Change Canada selected the Wildlife Acoustics Song Meters to monitor songbirds during the breeding season. Deploying and retrieving Song Meters during the winter allowed the team to meet the program objectives, collect more data than possible with traditional human based surveys, and minimize program costs. 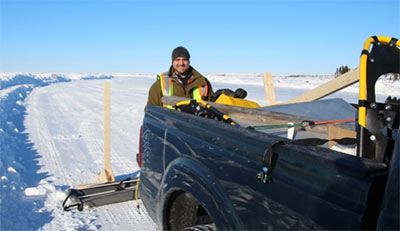 The Tibbitt to Contwoyto Winter Road covers a gradient of ecozones from dense boreal forest to tundra and is the only road in the region. During the months of February and March, the team deployed 100 Song Meters at lake edges and along portages. These units were preprogrammed to sleep throughout the remaining winter and wake in May when songbirds arrive from spring migration.

The Song Meters were deployed according to a spatially balanced sampling design along the ~400 km winter road. It takes a team of six people a week to complete the deployment. Sites are accessed by a combination of snowmobile and snowshoeing. Staff snowmobile to lake edges from the road (up to a maximum of 2 km), which usually runs down the center of the lake, and then snowshoe to the sampling location (50- 400 m from lake edge). Steep slopes near lake edges combined with cold temperatures (can be ~ -40°C/-40°F) and strong winds increase the complexity of accessing sampling locations. 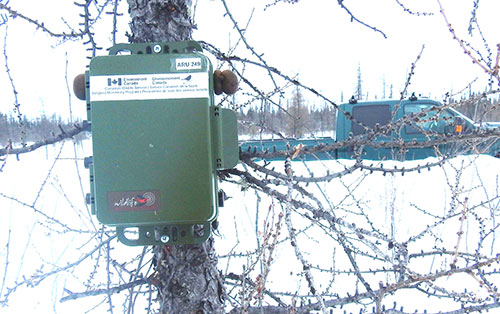 "Since the Song Meters are deployed for an entire year, we try to maximize data collection. Each unit contains four 32GB or two 64 GB SD cards. Our recording schedule is designed to capture spring arrival timing as well as data throughout the breeding season," says Rhiannon Pankratz from the Canadian Wildlife Service, Environment and Climate Change Canada team.

"Additionally, we are interested in peak species activity level which requires many recordings throughout the breeding season. As a result, we have a complex recording schedule to balance recording within and among days. The schedule alternates daily between multi-hour recordings and 10 min recordings at the top of the hour between 1 hour before sunset to 4 hours after sunrise" continues Pankratz.

Logistics plays a considerable role in the sampling design. The team needed to balance site access with limiting lake edge bias. Since the majority of this winter road is along lakes, any unit deployed at a lake edge would sample a large proportion of water. Winter roads also do not always follow the same portion of each lake each year, so there can be considerable year-to-year variation which will result in additional factors to be considered when deploying/retrieving units in subsequent years.

The program is still considered a pilot study and success will be measured by successful recordings. The Song Meters were successfully retrieved in March 2016 and withstood extreme temperatures ( -39 °C/-38°F) . The team will soon begin analyzing the data collected to inform on the abundance and distribution of northern breeding songbirds. The data will also be used to inform species habitat associations and eventually generate population trend estimates.

The team plans to expand the project to the other two major winter roads in the Northwest Territories where each winter road will be monitored every 3 years. This will provide information on songbird communities along important latitudinal gradients across the NWT. They also have a number of other automated recording based programs in the NWT, including a large scale songbird monitoring project in the Edéhzhíe Candidate National Wildlife Area and monitoring of the spatio-temporal responses of songbirds to natural disturbances.

*Thanks to Rhiannon Pankratz and Samuel Hache from the Canadian Wildlife Service Environment and Climate Change Canada team who provided most of the content for this case study.